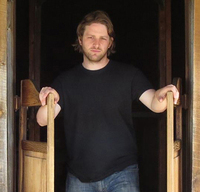 Casey Lewiston joined the E/PO group in 2015, after his first year at Sonoma State University. He spent time working in film and television production, retail management and marketing before deciding to return to school for a physics degree. Since starting with the E/PO group, Casey’s work has primarily focused on S4 and related projects.

Casey holds an associate degree in general business from College of the Redwoods in Humboldt County. He also holds an Emergency Medical Responder license and a Scottish Lordship. In addition to working with E/PO, Casey is the Producer for local video production company n-Space Media. In his free time he enjoys archery, hiking and backpacking, walking his cat, and the construction and operation of unmanned aircraft.